People took the matter on social media, discussing about the value of housework and the importance of men taking up household duties.

China is introducing a new civil code and the new rules are starting to show. A divorce in Chinese court in Beijing has decided and ordered a man to pay his wife for the housework she had done during the marriage.

The man had filed for divorce last year after being married for five years. At the beginning, she did not agree on getting a divorce, the decided to request financial compensation for all her housework during the marriage. The man reportedly did not do any effort in helping with either housework or caring for their son.

Beijing Fangshan District Court agreed with the woman and decided to order the man to pay for her unpaid labour over those five years, with a one-off payment of 50,000 yuan and a monthly alimony of 2,000 yuan. “The housework constitutes intangible property value”, said the judge and the decision was backed by the new civil code coming into effect this year in China.

People took the matter on social media, discussing about the value of housework. Some pointed out that a compensation of 50,000 yuan was not enough compared to five years of work. Other users assessed the importance of men assuming more household duties.

As average in OECD (Organisation for Economic Co-operation and Development) countries women still spend twice the hours men spend on household duties. After the introduction of a new civil code and after the news of Beijing court’s decision, it is clear that China wants to face this gender inequality.

World
World Health Organization calls out food markets that sell both live and death animals and can be dangerous for public health.

World
Police spokesman Erdi Chaniago said the West Java police would help investigate the cause of the fire.

World
India is seeing the number of new infections rise even faster than during the first wave, when it was close to 100,000 new cases per day.

Japan marks 10 years since the Tsunami which killed 18,500 people

UK Scientist: Due to Covid-19, a substantial degree of mortality inevitable in future 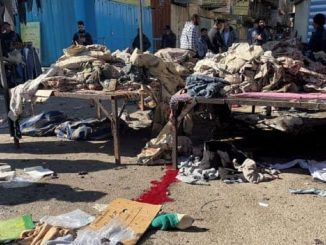