US presidential election, how does it work?

The candidate with the most votes might still lose, but why? Here’s how the US presidential election works.

The day has come, November 3, the election day is here and citizens, CEOs, Prime Ministers worldwide are awaiting the big announcement: who will be the next President of the United States of America? Knowing who’s the winner is not always as easy as it seems in other countries, in fact, in the US the candidate with most votes from the public could actually be the loser.

A guide to the US presidential election

First of all, the President of the United States will always be part of either the Democrats or the Republicans, which are the two parties dominating the political system. In this year’s case, Donald Trump belongs to the Republicans, had already won the 2016 elections against Hillary Clinton and is now trying to be leading the country for other 4 years.

On the contrary, Joe Biden belongs to the Democrats and has been the Vice President of the United States when Barack Obama was in power. The two political parties have substantial different beliefs: the Republicans usually stand for gun rights and want to restrict immigration, while the Democrats stand for civil rights and immigration.

Candidates don’t need ‘most votes’, why?

Right, this is where it gets interesting. Voters do not technically vote for either of the candidates and that is why the President of the United States could be a person most voters did not actually vote. The reason for this is that voters are actually voting for members of an electoral college. These ‘college’ members are the final electors and have the duty of electing the President and Vice-President. Each state of the country has a certain number of electors, based on the size of its population, and there is a total of 538 electoral college votes in the US. The next President will have to win 270 or more electoral votes. California has the most electors with a total of 55, New York counts 29, Texas has 38 and Florida 29, while other states like Wyoming, Alaska and North Dakota have the minimum of 3. The electoral college members reunite every four years after election day to choose the President and Vice-President of the United States. 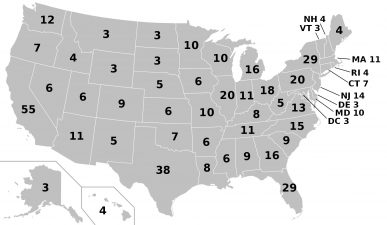 The thing is that, when a higher percentage of the electors of a state vote for one candidate, that candidate will receive all of that state electors’ votes. That is why a candidate might win although they did not receive the most votes from the public. Two big examples are George Bush in 2000 and Donald Trump in 2016, who both won although receiving fewer votes than the other candidate. This also explains why candidates tend to focus their electoral campaigns on certain states rather than others. Candidates usually target the ‘swing states’ (or ‘battleground’ states) that lean towards one political party rather than the other, so they will automatically receive all of that state’s electoral votes.

It usually takes several days to count the votes but it is normally clear who the winner is by the early morning of the following day. As this year the US saw the highest voter turnout rates, viewers will probably have to wait longer. The new President will officially be sworn into office on 20 January in the inauguration held on the steps of the Capitol building in Washington DC. Millions of people worldwide are awaiting the big announcement, meanwhile on social media Americans are following political polls and sharing their own predictions.

World
In her first appearance at a public event in months, Elizabeth II arrived on the arm of her son Andrew, who has been the subject of sexual assault allegations.

World
Johnson: ‘Impossible to normalise relations with Putin and to allow him to win would be to give a green light to all the autocrats in the world'”
loading...

World
Ukraine’s neutrality is at the heart of negotiations between Russia and Ukraine, which are struggling to find a compromise.

World
Anarchists attack the villa of a Russian oligarch in London. The attacks on the symbols of Moscow’s power in Europe continue.

Merkel proposes mandatory EU-wide quarantine for those arriving from UK

Meeting between Biden and Putin ended, for Russian president: “No hostilities”

A woman saved her twin sister from crocodile attack in Mexico

17 May, 2021
Copyright © 2020 | NewHub.co.uk - Edited in UK by Contents Media - All Rights Reserved.
All contents are produced in a hybrid way by a technology of Artificial Intelligence and by independent creators via the platform Contents.com. If you want to write for NewsHub.co.uk, Sign up to Contents Creators
Made with ❤ in London UK