Banksy created a mural on a boundary wall in homage to the famous writer. The prison is now in danger of being sold to property investors. The street artist would like to turn it into a cultural centre instead.

Street artist Banksy has taken to the field to try and save the former Reading Prison in southern England, where writer Oscar Wilde was locked up for a homosexual relationship.

The prison, disused since 2013, has been put up for sale by the government and could be bought by a construction group to make luxury flats.

But Banksy is not interested and to “save” the prison, he has decided to auction off the mural he painted on one of the prison walls.

As a tribute to Oscar Wilde, the world’s most famous faceless artist had painted a prisoner escaping via a rope made of sheets tied to a typewriter.

Prisoner escapes from Reading Prison (where Oscar Wilde was imprisoned): experts believe it is the work of Banksy

According to the Sunday Times, the matrix of Banksy’s mural is worth between £10 million and £15 million (€12 million to €18 million): a figure that may be able to outbid property investors. The former Reading prison could then be bought by the street artist, who intends to donate it to the city authorities and turn it into a cultural centre for the study of figurative and literary arts. 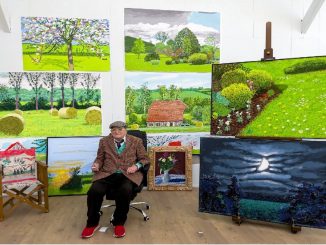 Art/design
David Hockney, through is work created on his iPad, wants people to admire the beauty of our world, especially during this difficul period.

Art/design
The work, which appeared on the red brick wall of the former Reading Prison that once housed Oscar Wilde, was officially claimed by the artist.
loading...

Choosing the right curtains for your home

Tips on how to plan a new bathroom

How to repair carpet?

How to make patterns?

Where to buy cheap bamboo rugs

How to clean a hardwood floor?

How to takes measures for curtains?

How to choose allergy-free bedding

A buyer's guide to oven and hob

22 May, 2020
Copyright © 2020 | NewHub.co.uk - Edited in UK by Contents Media - All Rights Reserved.
All contents are produced in a hybrid way by a technology of Artificial Intelligence and by independent creators via the platform Contents.com. If you want to write for NewsHub.co.uk, Sign up to Contents Creators
Made with ❤ in London UK